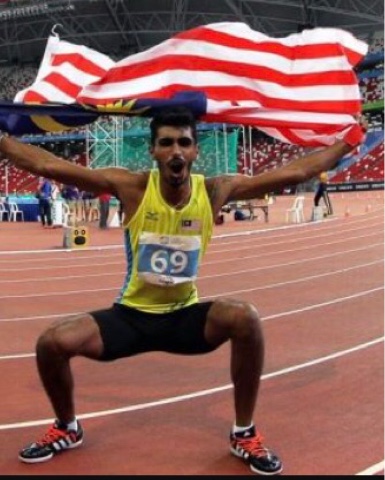 National high jumper Nauraj Singh Randhawa had to cut back on his training stint in Australia and will undergo an operation next Tuesday.

The national record holder who created waves by qualifying on merit to the Rio Olympics suffered an injury to his  elbow  last Wednesday during training  under his coach Alex Stewart in Sidney.

The injury will keep him on the sidelines for up to six weeks before he resumes light training.

" Well it was an accident which I sustained during training. It could had happened to anyone and it's normal but I was a little unfortunate it damaged my elbow more than the usual" explained Nauraj  who returned to Malaysia on Tuesday night when contacted.

"People fall off hurdles all the time during plyometrics.

" The good thing  is my lower limb is perfectly fine and I'm not looking at it as a set back , but rather as an opportunity to be able to work on certain areas which could benefit me in the long run like balance and strength in the lower part of my body.

Sports Minister Khairy Jamaluddin said that he was informed with regards to the injury sustained by Nauraj.

" He will be having a minor procedure but we expect a full recovery in 3 months," said Khairy when contacted.

Nauraj had an ankle injury in 2011 but recovered well enough to go out and set records in high jump.

There is no doubt that this 24 year old will be able to bounce back from this injury and go on to get the gold in SEA Games next August.

The Johor lad is destined for greater heights and will no doubt be extra cautious in trainings,

And he hopes to resume his training under Alex once he fully recovers.