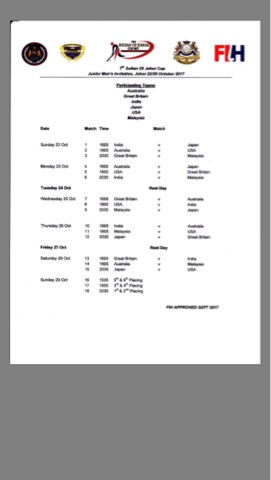 Malaysia will open its campaign in the 7th Sultan of Johor Cup against Great Britain.

The week long tournament to be held at the Taman Daya Hockey Stadium will see the hosts taking on Great Britain, India, Australia, United States of America and Japan.

The Malaysian team, coached by Wallace Tan, will then play India ( Oct 23) followed by Japan ( Oct 25), USA ( Oct 26) and complete the preliminary matches against Australia ( Oct 28).

While USA are making their debut, the participation of India who are the reigning world junior champions will surely attract the fans.

" This year the matches will be played in four quarter format in line with the requirements of the International Hockey Federation," said Organising Secretary of the SOJC Dato Manjit Majid Abdullah.

" We plan to hold several seminars and courses in collaboration  with the AHF Academy as well as coaching clinics for school children as part of our commitment to promote the sport.

" We hope that fans will make it a point to be at the stadium not only to support our Malaysian team but to watch the future stars of world Hockey in action."

Great Britain will be the first team to arrive in Johor Baru on October 17 and are expected to play some matches against the Johor Razak Cup squad.

Besides Wallace, the other coaches handling the team, comprising of 5 players that were in the Junior World Cup squad last year in India, are Mohd Amin Rahim, Nor Saiful Zaini , Madzli Ikmar and M. Nadarajah.

" I presently have a squad of 30 players and we have held several phases of training in preparation of the tournament," said Wallace.

" Looking at the teams it will be a tough tournament and the opening two matches will surely be a stern test for the team.

" We will assemble the team again in late September and plan to hold our final week of training in Johor a week before the tournament and hopefully get to play some friendly matches."

India will see Jude Felix coaching the squad and he had played in the Malaysian Hockey League in 1994, helping Yayasan Negri Sembilan to the league title that year.

Australia, who are the defending champions start of as favourites to retain the title.