WHY THE DELAY NSC?

Malaysia is my country, says Zulfadli 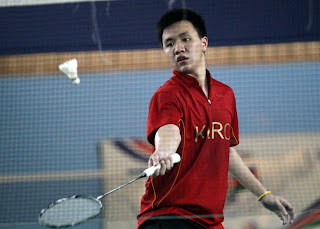 
KUALA LUMPUR: World and Asian junior champion Zulfadli Zulkifli has been offered to play for the United States in the Thomas Cup.

Internal bickering and the failure to acknowledge Zulfadli's efforts could prompt the youngster to don Uncle Sam’s colours.

Zulfadli is yet to receive his incentives estimated at RM50,000 since last year.

However, the Los Angeles-born lad does not want to turn his back on Malaysia — not at the moment, anyway.

Zulfadli’s dad Zulkifli Sidek, who is also his coach, confirmed his son was approached by the US Badminton Association and a US player. They want to strengthen the US team for the Thomas Cup.

It is pertinent to point out Zulkifli used to train the US team from 1990-94.

"My son said no. He wants to play for Malaysia and I guess he pretty much made up his mind,” said Zulkifli.

“I also want Zulfadli to play for Malaysia and I’m happy he made that choice.

"But I hope to see Zulfadli in the Malaysian team for next year's Thomas Cup, even as a reserve.”

BAM have yet to name the squad for the Thomas Cup in May 20-27 in Wuhan, China.

Former junior player Arif Latiff was part of the Thomas Cup team in 2008.

Zulfadli was apparently approached by an official during last year’s Thomas and Uber Cups held in KL. The USA team played in the Uber Cup.

American player Howard Bach followed up later to ask Zulfadli to consider playing for US as they “lacked singles players”.

Zulfadli, who plays under the KLRC banner, is yet to receive his incentives since winning honours for the country last year.

Zulfadli was the placed third in the 2010 Asia Junior championships and the national team were runnersup in the same competition.

This year, he won the World and Asian junior championships and the Commonwealth Youth Games.

Zulkifli insisted his son was not demanding the incentives but found it strange how quickly Sea Games medal-winners were rewarded in a pomp affair.